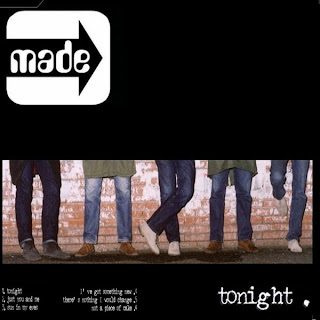 Made are a five members band from Italy playing a mod/beat/powerpop oriented music using vintage instruments (Hammond, Farfisa, Vox, Rickenbacker) but they don't dislike some of the more recent britpop sounds. In the past years they've played at the main Italian mod, scooterist and sixties events (Rimini “The Italian Job” International Mod Rally (1998, 2000 & 2004), Beat Festival 2000, Italian Mods Mayday 2000, Italian National Mod Rally 1999, the Other Face mod Rally 2001, Isola d'Elba Tuscany International Scooter Rally 2002, Ticino Mod Rally 2003, Hot mod summer on the lake 2004, Italian Mod Rally 2006, etc.) so that they are now one of the best known Italian bands in the whole MOD scene.
In 1997 they released their first demotape “Greatest Hits vol.2”. In 1999 they made their first record : a 7” split EP (along with Wigan Casino) produced by Modern Groove Records. This record had many good reviews on rock magazines and fanzines. In 2000 they gave two songs for the “Mondo Beat vol. 2” compilation cd by Face/Sony (featuring some the best sixties European bands like Solarflares, Diaboliks, Slow Slushy Boys, Others, etc.) and they had many new good reviews. In the same year they also appeared in the “Gamut Assembly vol.5” compilation cd by the british label Dizzy Lug'ole Records.
In springtime 2001 they had their first album “Made this way!” finally out on Vitaminic and many more gigs and good reviews. Last but not least they were also featured on the “Music for Truckers” international compilation by La Skaletta Rock Club (featuring bands like Kowalskis, Surfin' Lungs, Peawees, Manges, Apers, Fairlanes, etc.) which put their name out into the punk rock scene too.
In 2003 the 6 tracks Cd-Ep “Tonight” has been produced by Skipping Musez Records and followed, as usual, by lots of good reviews in the best Italian and European modzines and rock magazines. Tonight has been reissued, with four bonus tracks, in 2006 by Revel Yell Music label for the Japanese market.
After more than 10 years since their birth, this great italian MOD band released a brand new album which will be well appreciated from who loves Who, Kinks, Small Faces, Jam, Blur, the Power Pop sound and any kind of Brit Rock… "They Don't Understand" Cd, 2009.