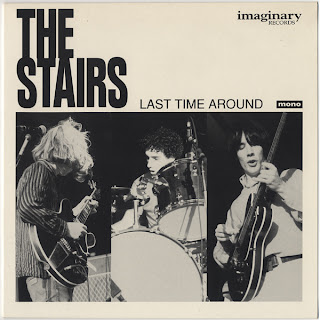 This is the fourth and last EP of the band. We have four tunes again, two from Edgar Summertyme, one from Ged Lynn, and the Del-Vetts version which gives its title to the record. The EP was published under the Imaginary Records label (the three preceding ones and the Mexican R'n'B LP were published by Go! Discs), and maybe it was a nice gesture for that label, as they were supposed to publish the first “Weed Bus" EP with them. After that EP the band started to implement changes, both in the staff (adding two guitars) and with Ged Lynn’s departure in 94, and in the music, drifting towards blues rock or psychodelia. All that and constant delays in the recording of their second album were conducive to the band separating in 1994. Their "second album" was "Our Life Behind The Golden Cabbage", and the Viper label was supposed to publish it in 2008 but with the title "Who Is This Is was". Previously in 2006, a compilation and alternative tunes, "Right in the Back of Your Mind", were also published under the Viper label.
The interesting bit in this "Last Time Around" EP, apart from the fact that it follows on the footsteps of the three preceding ones and that it is a mono recording, is that the four tunes do not feature in any of the two Viper records mentioned earlier. 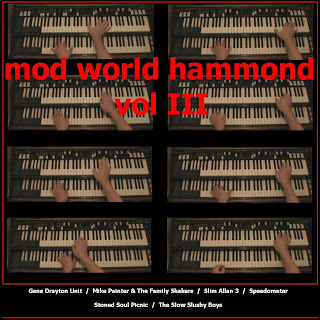 Another personal recopilation of Hammond bands, Comments are from the bands' web pages (2008)

The GDU does the Hammond & horn thing in a way that references the sixties, but is at the same time thoroughly modern. With the blues at the root, the sound fuses jazz, rhythm ‘n’ blues, garage, northern soul, rock, funk and punk. Live Drayton shows are renowned for their energy, excitement and unpredictability - nothing’s ruled out in the GDU repertoire; as Gene always maintains, You Can’t Sit Still. The Unit has released 6 vinyl singles and 3 LPs, and has gigged extensively across England and in Italy, Spain, Sweden, France, Ireland, Belgium and Scotland. A new GDU single (Chips and Beans/Geno) and album (Done'n'Dusted) are now available.

They make great wine in France; now they also make great rock n roll. The Slow Slushy Boys have been together for nearly a decade honing a sound as vintage as a finely aged Bordeaux. But this ain't music for no sippin' sophisticate—this is foot-stompin', grape-stompin' boogaloo till you're blue party music. Whether you're on the dance floor doing the Boob or the Whelkey Walk, the Slow Slushy Boys keep the beat pumpin' and the organ wailin' like no one since Manfred Mann first belted out "Doo Wah Diddy." This collection represents their first American CD, which gathers 16 of their best tracks from the past 7 years: "Do the Boob," "She-Demon," "Get Back," "Nobody But a Snobby Fool," and many more. When you're in a quandry over what musical concoction to serve your friends at your next happening, make it slushy!

UK's premier funk band started out as a quartet gigging in small clubs in the Southeast of England in 1999, playing classic funk tunes by artists such as The Meters and The JB's. The band soon expanded, adding the now renowned horn section and vocalists (The Speedettes) in 2001, which has enabled them to deliver the powerhouse deep funk sound they're known for today.
Over the years, Speedometer has worked with many of the US funk legends including Joe Quarterman, Eddie Bo, Marva Whitney, Sharon Jones, James Bell (Highlighters), Lee Fields, and Billy Wooten. All the artists were blown away by Speedometer's authenticity to the original soul-funk sound.
In 2000, the first single was released "Soul Safari" on Soul Fire Records and soon followed several other releases by other labels. Each limited 45 single sold out to a rapidly growing funk audience. Three years later the band joined forces with Blow it Hard Records to record the first Speedometer LP. THIS IS SPEEDOMETER (VOL.I) blended their love of heavy deep funk but fused it with Soul and Latin grooves that gave the eagerly awaiting funk fans and DJ's one of the best new funk albums since the 1970's.
2005 saw the follow up album "THIS IS SPEEDOMETER (VOL. 2)". This second volume proved the bands credentials in delivering unrivalled heavyweight funk grooves and super-soul vocals from soul diva Ria Currie and the Speedettes. The funky re-work of Beyonce's "Work it out" has been one of the most successful new funk 45's to date and in the top 10 of discerning funk/soul DJ's.
Speedometer has played all over UK, Europe and Japan over the last 2 years and now are about to release their 4th album ("4 Flights Up", due April 2007). The early indications from the band suggest the heaviest funk is yet to come....

Stoned Soul Picnic are an instrumental Hammond Organ based combo formed in 1999 by four musicians with a mutual enthusiasm for the funky soul grooves laid down by the likes of The Meters and The Mohawks. With a sound led by swirling Hammond and fatback drums, the band have carved a reputation as a formidable live funk band, with a string of successful festival and club dates across the U.K and Europe. Stoned Soul Picnic played a blinding gig, impressing all with a set of soul/funk Hammond grooves.well worth checking out ! Stoned Soul Picnic headlined the Saturday night show, serving up a huge slice of Hammond driven soul much to the delight of the huge crowd in attendance Scootering Magazine I knew it would be good but this was something else..Hammond heaven !!! Put simply, Stoned Soul Picnic live is a totally awesome experience. Ill definitely jump on the boogaloo highway to catch them again soon ....JTQgroove.com The band are also available with the sensational vocalist Marika, whose voice can be heard on countless soul/dance records thanks to her session work for Café del mar and many others. Marika features on SSPs LP on 2 tracks and adds another dimension to thr bands live sound with her powerhouse soul vocals. The bands 45rpm vinyl releases have become staples on funk DJs playlists all over the world, and have become collectors items in their own right. Stoned Soul Picnic have also featured on Exile on Hammond Street on Acid Jazz records, Soul Shakers Vol.2 and Lets Boogaloo Volumes 1 & 3 on Italys Recordkicks label. The new 45 Erotic cakes was released on French label Soul cookers in January 2006 to rave reviews and is a taster for the much anticipated LP due later in the year.

Slim Allan 3 started at Helsinki, Finland in1998. The band is basically a traditional ODG,organ-drums-guitar trio. The main influences comes from the 60's instrumentals, Funk, Jazz and Blues: Wes Montgomery Trio, Jack McDuff, Booker T. & MG’s, JB’s. From the beginning the band’s line-up has been the same: Petri Rannikko (Hammond C3), Jarmo Vannemaa (Drums), Aslak Lindeman (Guitar). They come from a background of paying their dues in various local R&B, Blues and Jazz acts.
In 2001, SA3 did release their first 45 single “The Big Set-Up / Doggy Bag” (POPSI-001) for Popangel label. The good feedback was a surprise for Popangel staff and especially for the band members. The late-60s JB’s-styled groove and a jazzy tune with drum breaks found favour in Scandinavia and England. Local radio stations and Dj’s were also interested about this fairly unknown Organ Trio.
The second 45 single “Bug Hunt / Gun Court” (POPSI-002) was released in 2002. Again with the help of Popangel staff & label. This time the band was featured by an old-skool Turntable specialist, Dj Pedro de Cabo Pasto. Echoes from the Blues, Reggae and psychedelic 70’s are heard in this release. On the top of the all there are those cone busting Hammond C3 bass pedals, the trademark of SA3.
The future? In Slim Allan 3’s case it’s based on old Hammond C3, Fender Telecaster through a black-face Deluxe Reverb amp, vintage Ludwig drums and tight, groovy Organ Trio sound.

Composer and hammond player from Milan, Mike Painter (Michele Pingitore) began his career in the early eighties as member of the mod-beat band "Four By Art".They made two albums for the Electric Eye label.Following this success, Mike then formed mod-soul group "The Investigators" releasing a record for Voxx Pop. Another Mike's bands are "Il Santo" and "Mr Tokyo And Beat Goes On".Finally aftermany years spent in different bands here it is his solo project band: "Mike Painter & The Family Shakers".Mike brings us a rich blend of sublime Hammond leads and cool modern jazz sounds. 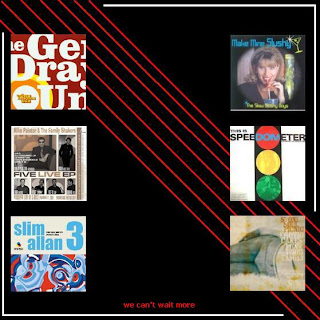